The OpenID Connect Session Management specification defines methodologies to manage user sessions and log out end-users at the authorization server using front-channel communication. In this approach, the login/logout requests from the RP (Relying Party or the client application) to OP (OpenID Provider) and OP to RP are done via the user agent (browser based).

To obtain the user’s logging state, the specification recommends the approach of polling a hidden OP iframe from an RP iframe with an origin restricted postMessage. The main advantage of this approach is that it will not cause any network traffic.

The OP iframe loads on the RP side based on the OP’s check_session_iframe endpoint. The OP iframe must enforce that the caller has the same origin as its parent frame. It must reject postMessage requests from any other source origin.

Session state is a JSON string that represents the end-user's login state at the OP. The session_state value contains "a salted cryptographic hash of Client ID, origin URL, and OP browser state". The OP passes this value to the RP in the authentication response and the RP uses this value to monitor end-user session at the OP.

The following diagram represents the flow. 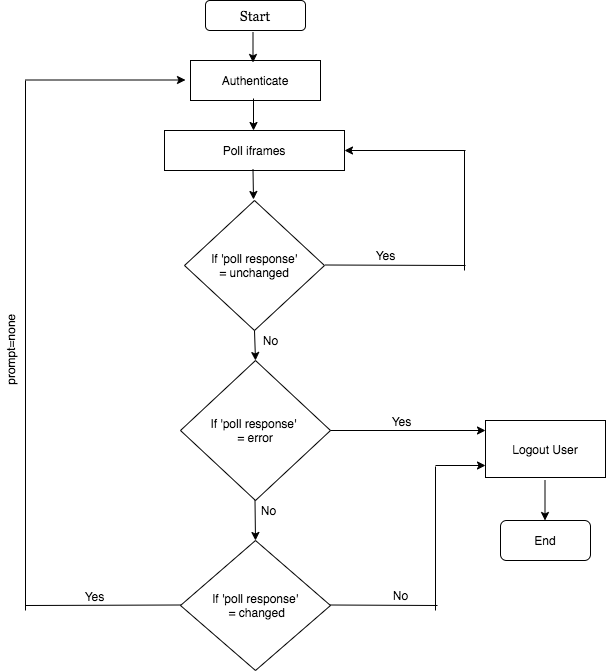 The status can be either;

In RP-initiated logout, once an end-user is logged out from the RP, it can notify the OP regarding that. In this case, the RP, after having logged the end-user out of the RP, redirects the end-user’s user agent to the OP’s logout endpoint URL. This URL is obtained via the end_session_endpoint described above.

Following parameters are optional and recommended to be passed as query parameters in the logout request.

This is the previously issued ID Token. This should be passed to the logout endpoint as a hint about the end-user’s current authenticated session with the client. This is used as an indication of the identity of the end-user that the RP is requesting to be logged out by the OP. The OP need not be listed as an audience of the ID Token when it is used as an id_token_hint value.

This is the URL to which the RP is requesting that the end-user’s user agent be redirected after a logout has been performed. The value should have been previously registered with the OP.