You can run multiple nodes of WSO2 Identity Server in a cluster mode to achieve two requirements.

The following sections guide you through setting up the deployment pattern, which is an HA Clustered Deployment of two WSO2 Identity Server nodes.

As a first step in planning your deployment, ensure that you have the necessary system requirements and a compatible environment.

The above recommendations can change based on the expected concurrency and performance.

In a clustered deployment, all WSO2 Identity Server nodes are pointed to the same databases to ensure the integrity of the data. Also, you can configure multiple logical databases if you require to keep your data logically separated in the environment. The following tutorial demonstrates deployment with an identity database (IDENTITY_DB) and a user database (UM_DB).

If you have configured the shared database correctly, the deployment.toml file in <IS_HOME>/repository/conf directory should have the following configurations.

Following is a sample configuration. Therefore parameter values might be different.

The following diagram is a high-level component diagram showing how the system would look like when two databases are used. 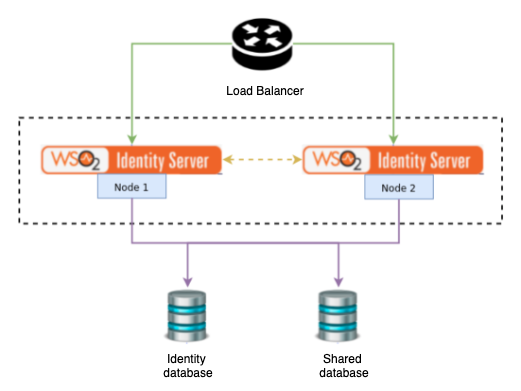 For instructions on how to configure the data sources for other databases and more information related to databases, see Work with Databases

In this cluster setup, we use the default h2 database as the local registry in each node individually, and the governance and configuration registries should be mounted to share across all nodes. In WSO2 Identity Server, config and governance registries are mounted by default.

The production recommendation is to set the <versionResourcesOnChange> property in the registry.xml file to false. This is because the automatic versioning of resources can be an extremely expensive operation.

To make sure the configurations were applied correctly,

The following configurations need to be done in both the WSO2 Identity Server nodes in order to enable clustering between them.

To enable synchronization for runtime artifacts, you must have a shared file system. You can use one of the following depending on your environment.

Once you have chosen a file system,

Front with a load balancer¶

In order to access the two WSO2 Identity Server nodes, you need to front the system with a load balancer. You can use any load balancer that is available to your system.

To learn how to front the 2 node cluster with an Nginx load balance, see Set up WSO2 clusters with Nginx. If you’ve changed the hostnames of nodes, make sure to keep that in mind when you’re configuring your load balancer.